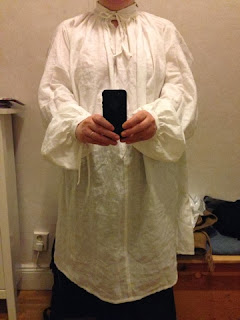 Last time I moved I did actually get rid of some of the things that I would probably never finish. This shirt however I could not leave since it is such a lovely soft fabric.

When the Under It All challenge came up I decided to take it out of the bag where it had been sitting for five years or so. I soon realized that the problem was the ruffle. "What ruffle?", you ask. Well, the one that I unpicked, tried once more to attach neatly and then unpicked again and settled for doing without in order to actually finish the shirt.

I also decided to sew the remaining long straight seams using the sewing machine. I then unpicked those since I had it inside out when sewing them. The only reasonable place to use the sewing machine at the moment is the kitchen table, and by the time I had unpicked the seams someone else had spread out an entirely different project there. So the shirt is hand-sewn since I wanted to finish it rather than wait for my turn to use the table.

The Challenge: A 16th century shirt
Fabric: Thin hemp
Pattern: Loosely based on somebody's description of the Sture shirts, I think.
Year: 16th century
Notions: thread (linen, silk and cotton by the looks of it)
How historically accurate is it? Reasonably
Hours to complete: No idea, how about thirty?
First worn: Only for the photo. I intend to make a dress to go on top of it.
Total cost: None now, and I don't remember how much it was when I bought it.
Posted by Julia at 10:05 PM

Julia
Recreational medievalist going by the name of Druda Uddormsdotter in the Society for Creative Anachronism. A blog about my SCA interests. The most likely topic is food, viking, medieval and renaissance food, but you will also find posts about other stuff such as clothes and accessories, tents and furniture and events.