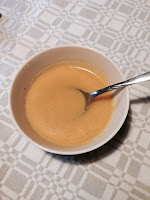 Other than pie shapes, I also prepared for the feast of St. Egon by trying the orange and sorrel sauce from Early French Cookery (p. 211). I was kind of amazed to find sorrel at my regular web food store (we get home delivery occasionally for convenience). I used juice from both Seville oranges and regular, and the sauce was tangy but very good. I didn't buy sole since I thought it a bit expensive for at test run. We had it with fish for dinner the first day and the leftovers with chicken the day after. The recipe in the book is based on a brief note of what goes with which fish, and not a complete extant recipe. I'm not sure about the generous amount of butter in it given that it is a sauce for fish probably served on a fish day. Using for example olive oil would probably be equally tasty, but different. If using no fat to rounden the flavour I would probably have wanted some stock or cooking juices from the fish.
Unfortunately I was ill and didn't go to St. Egon, but the kitchen made the sauce anyway. I had promised to get sorrel, which I did and sent with a couple of friends. I was kind of sad to wave a box of sorrel plants off and just go back to bed myself. This time I asked my local store to get it since I realised that they carry the brand of fresh herbs that grows the sorrel and could probably order them for me.
Posted by Julia at 12:15 PM No comments: 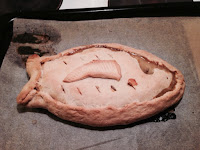 I tried making a fish-shaped meat pie a while ago. I intended to do that for S:t Egon and Nordmark coronet tourney this weekend but we have got the flu so we didn't go. Anyway, it's at hot water crust pastry from one part boiling water, one part fat and two parts flour. I could work at bit more on the artistic side of things, but I thought the dough was nice to work with, not to hard to shape and it did at least sort of keep the shape given. This is something I might try again since it's a so much nicer presentation than disposable pie tins. The filling is meat and dried fruit boiled in wine and spices and could have been slightly less wet.
Posted by Julia at 9:04 AM No comments: 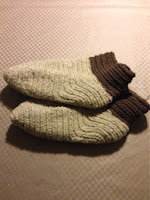 I bought yarn from a friend ages ago that had some cow hair mixed into the wool. I intended to make a pair of naalebound short socks from it, thinking that they would be slightly more water repellant than regular woolen socks. Unfortunately I miscalculated how much yarn I would need and was unable to finish the socks. I put them aside and thought that I should buy some more yarn to finish them and then I forgot all about them. When I finally got around to asking the seller had no more left of the yarn so I had to go for something else for the last bit of the socks. If one tries to look at the bright side of this I have not only finally finished the socks, but also used up a small ball of brown yarn that I have had for ages.
Posted by Julia at 9:26 AM No comments: 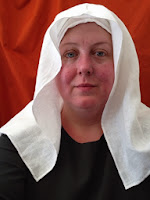 I have a couple of thin cotton veils that I have been using for ages. The first one I got at a Christmas gift exchange in Gotvik my first year as a member. After that I made a smaller one, which I every time I weat it think is too small, and a larger one that looks cool but is always getting in the way of things, so the first medium-sized one is the one I have been using the most. I have also had  some fine hemp fabric that I meant to make a couple of better veils out of. I have had it for quite some time not getting around to actually cutting and hemming it. This year I did actually manage to make one half circel veil and one oval. The hems could have been narrower, but at least I have new crispy veils. I like the way it falls around the face, it is slighty more stiff than the other ones. Ignore the strange placement and view of the veil, I accidentally just deleted a better photo.
Posted by Julia at 5:51 PM No comments: 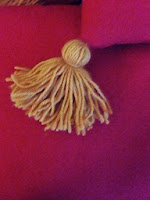 We have been to Double wars, it was great! I hade intended to do some stuff for the tent and things were sort of almost done. I had made tassels for the two cushions for the benches, but I did not have time to sew them on before leaving and I also forgot them at home. Now that we are home again I out them on so that it will actually be done the next time I need them.

I had also made new curtains to use as inner walls since we like to divide the tent into different rooms. I measured by the old ones, completely forgetting that dependeing on which height we put the spoke and wheels at they are a little or a lot too long. I did an emergency basting to get them usable, but they will need a remake. Adding a couple of extra ties would not hurt either.

In many other ways the camping was smooth. The tent behaved well, the rope bed worked much better with the new and different rope and we managed to feed ourselves with a reasonable amount of work. 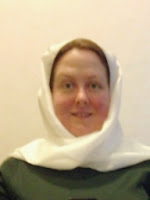 I got rid of the most annoying UFO:s little over a year ago before moving, but there are still projects that I gave up in the middle lying about here.

Yesterday I finished a silk veil, a long oval or maybe a rectangle with very rounded corners. I think that the reason why I stopped hemming it was the realization that it is a slippery silk that will probably make me go crazy when trying to make it stay on my head. Well, it's soft and shiny so I will probably give it go, but I need to find som thin good-looking pins to keep it in place. It's also possible that I stopped because the rolled hem was uneven and that I really, really didn't want to unpick it. 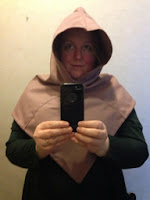 I don't think there will be nuch done by made for the Historical Sew Fortnightly. It looks like I never made the blog roll and the things I should finish won't fit in the challenges.

This is a hasty version of a viking hood, and the fit is not great. It's however very much what I'm missing for my viking garb, something to keep the cold off my neck and shoulders. I used information from the Internet, mainly from http://www.medieval-baltic.us/skjold.html and made alterations as I went along. The main piece had a fold on top of the head when I started, but it was much too long so I shortened it there instead of taking out the gores and cutting away fabric at the bottom.
Posted by Julia at 4:53 PM No comments:

Julia
Recreational medievalist going by the name of Druda Uddormsdotter in the Society for Creative Anachronism. A blog about my SCA interests. The most likely topic is food, viking, medieval and renaissance food, but you will also find posts about other stuff such as clothes and accessories, tents and furniture and events.